Digitization – 5 Things that Need to Change

If it’s not about the climate, digitization is everywhere. At least it feels like it is. Digitization changes everything, needs new infrastructures, threatens jobs. If you believe Google Trends, it is more important than “Industry 4.0”, 5G networks, and artificial intelligence by now.

Politicians therefore want to integrate us digitally, as less than half of Germans (42%) keep pace with digital development, according to a study by the Federal Ministry for Economic Affairs and Energy (BMWi). At the same time, the BMWI documents on its website that GAFA (Google, Apple, Facebook, Amazon) and Chinese platforms such as Tencent are leaping ahead of the DAX heavyweights in the 2012-2016 observation period in terms of sales, profits, employees, and market capitalization.

Nevertheless, our institutions remain strangely vague when it comes to a concrete description of what is going on. To remain on the safe side, the Ministry of Economic Affairs does not provide a definition of digitization on its website (at least one cannot find it using the search function provided!). And the European Commission also tries to describe digital transformation as “… characterized by a fusion of advanced technologies and the integration of physical and digital systems, the predominance of innovative business models and new processes… ” rather than defining it, only to add that “… EU Businesses are not taking full advantage of the advanced technologies or the innovative business models…”. Too bad.

No wonder that 58% of the executives surveyed by Celonis do not know where to start when it comes to developing a suitable (digitization-) strategy (Handelsblatt, March 22, 2019). If the Alexander von Humboldt Institute for Internet and Society also finds in its study on digital innovation in small and medium-sized companies “… that classic German engineering thinking and digitization don’t (always) go together …” it seems about time to deal with digitization beyond buzzwords. 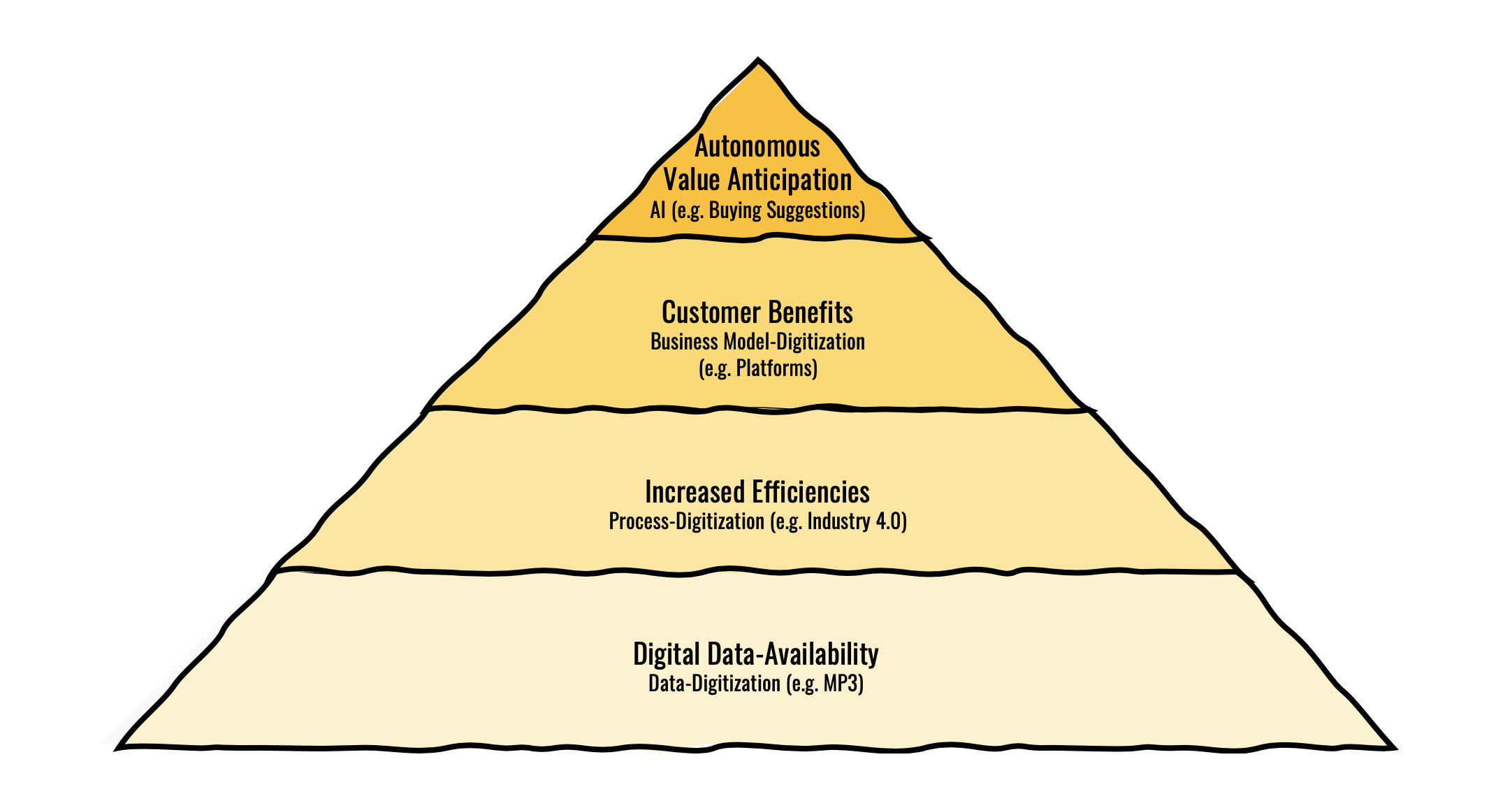 A first step would be to describe the phenomenon of “digitization” more specifically.

If you look up “digitization” in the digital dictionary or the Internet, you will find a starting point: the conversion and making available of analog data such as e.g. Music recordings as MP3 files or the digital recording of sales and production data in ERP systems.

Based on these digital data, efficiencies can be enhanced through digital mapping, control, and optimization of processes. The much-touted Industry 4.0 falls into this category. However, while the resulting added value may be interesting for “old” industries, it does not scale nearly enough to address the above-described discrepancy between DAX and GAFA companies (see e.g. McKinsey Quarterly 2/2017).

Genuinely digital business models as the next level solve user problems in a new way and create quantum leaps in benefits for customers and providers – occasionally in personal union. This includes the much-discussed platforms where providers and consumers interact digitally with one another for mutual benefit. GAFA (Google, Apple, Facebook, Amazon), BAT (Baidu, Alibaba, Tencent) and other fast growing players in the West and the East show us how to do it.

They are also the ones who have been working for a while now with the next level of digitization, at which benefits for individual users (and providers) are autonomously anticipated by digital systems. Artificial intelligence independently creates offers, models or processes. Individualized music offers from Spotify, AI-based tomography diagnostics from Siemens Healthineers or fraud prevention through the use of artificial intelligence at Mastercard are just the beginning.

Digitization is therefore best defined as the creative application of digital information and communication technology to maximize benefits for humans and – only subsequently – companies.

Digital technology in itself is solely an extremely versatile and effective means to an end.

Only when we finally understand that digitization is not about technology, but about solving human problems with the help of this technology, will we begin to tap into the potential of digitization.

If Germany and Europe want to play a part, we have to change at least four things:

Instead of understanding the Internet as a parallel universe and technology development in itself as adding value, we Europeans should finally understand the world of the 21st century as digitally integrated. It was not for nothing that the “Economist” recently titled “Chips with Everything”. Digital technologies have to be understood as what they can be: unprecedented problem-solving tools that can open up unimaginable potentials for people and the economy. As said before, technology itself only plays a secondary role.

Digitization needs more strategy (at all levels!) – but a different one. The classic separation of strategy and execution no longer works. Emerging potentials can often no longer be planned. The leading customer messaging platform Intercom, for example, emerged from the communication component of the error tracking tool of an Irish IT consultancy. A clear vision and focused strategic initiatives, which are mapped, for example, with objectives and key results (OKRs) and reviewed at least every 90 days, ensure dynamic strategy development. An approach, by the way, which has its origin in the “Mission Tactics” introduced by Prussian general Helmut von Moltke.

Change the Way You Work

Digital value add is gained by maximizing user benefit. The industrial tool inventory, which primarily serves to increase process efficiency, is becoming less important as the digital part of the value chain grows. Tools in the digital age understand customer needs scientifically and data-based. They make it possible to quickly develop hypotheses about possible solutions and test these solutions directly, so that they can be adapted based on the test results if necessary. This way, they accelerate innovation cycles and reduce undesirable and costly developments.

These changes require the courage to try new things and may prove to be strenuous. Or as business writer Ash Maurya recently put it:

“Adopting anything new takes effort. It requires us to go from being experts in the old way (the familiar) to becoming beginners in the new way (the uncertain).”

The alternative is to continue to conveniently push digital reality into an undefined future and leave it to the Californian and – increasingly – Chinese professionals, thus accepting an increasing loss of value-add in our European companies.

(If you don’t want to accept this for your business, we look forward to hearing from you.)