Is it Time to Change Innovation Accounting?

There seems to be a growing consensus that managing innovations as a portfolio of incremental, adjacent, and transformational/disruptive projects improves longterm innovation outcomes.

Still, the odds often end up being stacked towards more incremental projects. So much in fact, that a 2012 study by the APQC and Robert G. Cooper comparing the 1990s with the 2000s reveals a 80.1% increase in product improvement and modification projects with the number of breakthrough projects decreasing by 43.7% during the same period.

There are in my opinion two reasons for that:

The outcomes of transformational or discruptive innovation projects are hard to predict. To tackle these problems successfully requires applying methods like Design Thinking/Prototyping, Customer Building, or some other iterative approach that embraces setbacks. Culturally this is alien to most large, increasingly security- and efficiency-minded organisations, where any type of innovation activity usually is expected to equal unidirectional value creation. (A topic to explore further in a later post.)

Aggravating the issue is the widespread use of ROI or NPV as the base for all-or-nothing innovation project decisions. Both calculation models require the responsible Product- or Innovation Managers to take a huge leap by forecasting multi year revenues at a point where they may not have more than an “informed hunch” about a market. If they are brave enough, they will state their best assumption to get the project funded, but asking them to do that is fundamentally “…asking for LIES.” as Dave McClure (of Startup accelerator “500 Startups”) put it in a tweet last July.

In my experience requiring firm multi-year revenue projections for transformational projects at this stage will also often lead to a series of pointless arguments at every review or milestone down the road. While learnings build, the initial numbers will continue to loom over every discussion and as a result time and again will call the merit of the project as such into question.

To avoid this, disruptive projects require an accounting model that satisfies Finance’s and Management’s legitimate requirement to valuate an innovation project before and at multiple points during the innovation process. At the same time it needs to provide a complement for the reevaluation of the project at every stage based on what has been learned to that point and the investment required to get it to the next stage.

Cooper in 2012 proposed to apply ECV (Expected Commercial Value) as a means to develop a decision tree that accomodates step-wise verdicts on further investments into a project. This is a major step forward as it breaks down an all-or-nothing ROI- or NPV-based decision as a prerequisite to project approval into a series of risk-reduced “success/kill” decisions at major milestones that are in turn based on increasingly solid information about the project’s worthiness. However it still requires a Present Value to calculate back from which feels awfully close to those dreaded revenue projections.

David Binetti in his intriguing April 2015 Medium post suggests using a familiar financial metaphor for providing normalized measures of risk and return for every possible outcome. Applying a (trinomial) financial options model based on only three inputs:

he arrives at an options pricing tree in which every node represents a project’s current value based on progress (number of reporting intervals) and assessment of learnings, allowing for finer-grained informed decisions after every iteration of the project. 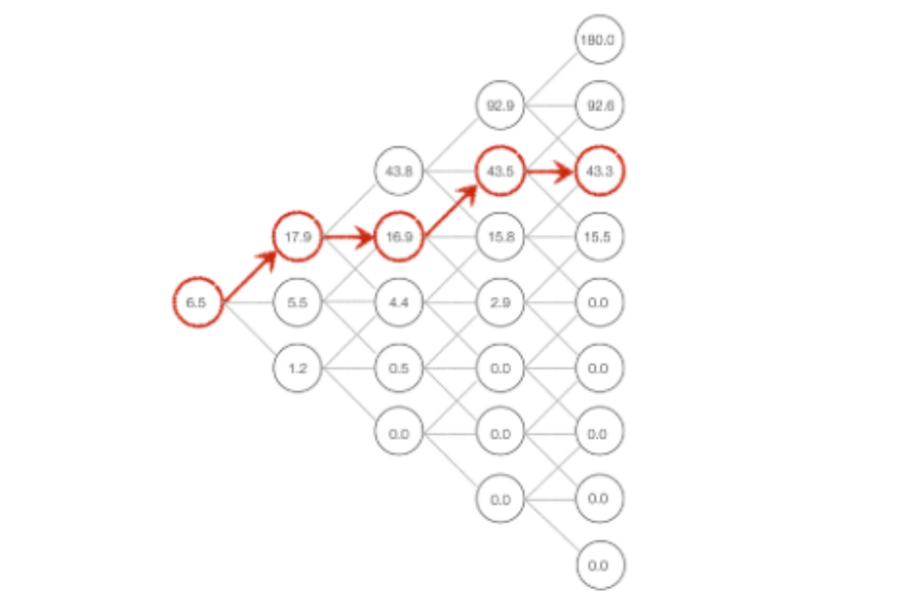 While the model may not resolve the issue of metrics and scoring models to interpret and evaluate learnings in particular during the early stages of a project, there are a number of intriguing benefits with respect to the evaluation of disruptive innovation projects:

Especially the latter two appear to finally fulfil the requirements for an accounting model that adequately supports disruptive innovations. So, ist it time to change our innovation accounting to make it more suitable for transformational projects?