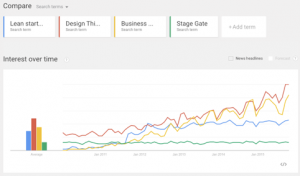 I could not help but think of the (in)famous European Song Contest, when I – spurred by a recent conversation during one of my Design Thinking Workshops – plotted the worldwide interest in recent innovation methods using Google Trends.

As you can tell from the graph, in particular Design Thinking, Business Model Canvas, and – to a lesser degree – Lean Startup have gained considerable interest and traction worldwide. Interest in every one of these innovation approaches had by the end of 2011 surpassed “Stage-Gate”, the venerable, efficiency-oriented process model of the 90s.

Not a surprise to my mind considering the well-documented contribution of Design Thinking to e.g. the astounding success of AirBnB and the development SAP’s Hana database technology. Or the fact, that according to Compass’ “Startup Genome” study, more than 60% of US startups surveyed cite Stanford’s Steve Blank as their main influence, who in turn purveys a clever combination of Business Model Canvas and Lean Startup in his “Entrepreneur Stack” approach to developing successful businesses.

Digging deeper into the data, I looked at the regional distribution of interest as exemplified by Google Trend’s indexed ranking of searches by region. Shockingly Germany ranks 9th for relative interest in “Design Thinking” (sandwiched between Switzerland and – at the same index level as Germany – Colombia), holds the same 9th place (after India and before Poland) when it comes to “Lean Startup”, and does not show at all in the top 10 for “Business Model Canvas” which is dominated by smaller European countries but also includes Malaysia, Indonesia, and Colombia.

Seeing the positive impact on innovation of in particular Design Thinking and Business Model Canvas in our work with clients, I did hope that these results might be artefacts. Germany’s no 4 ranking (ahead of the US this time!) for “Stage-Gate”-related searches seems however to suggest they are not.

Much like with the Song Contest my compatriots seem eager to avoid novel recipes. At the ESC the results became visible quite quickly – zero points! Hope we won’t see the same result in GDP growth any time soon.

PS It does not seem to bode well for the EC that neither France nor Italy even make the ranking.